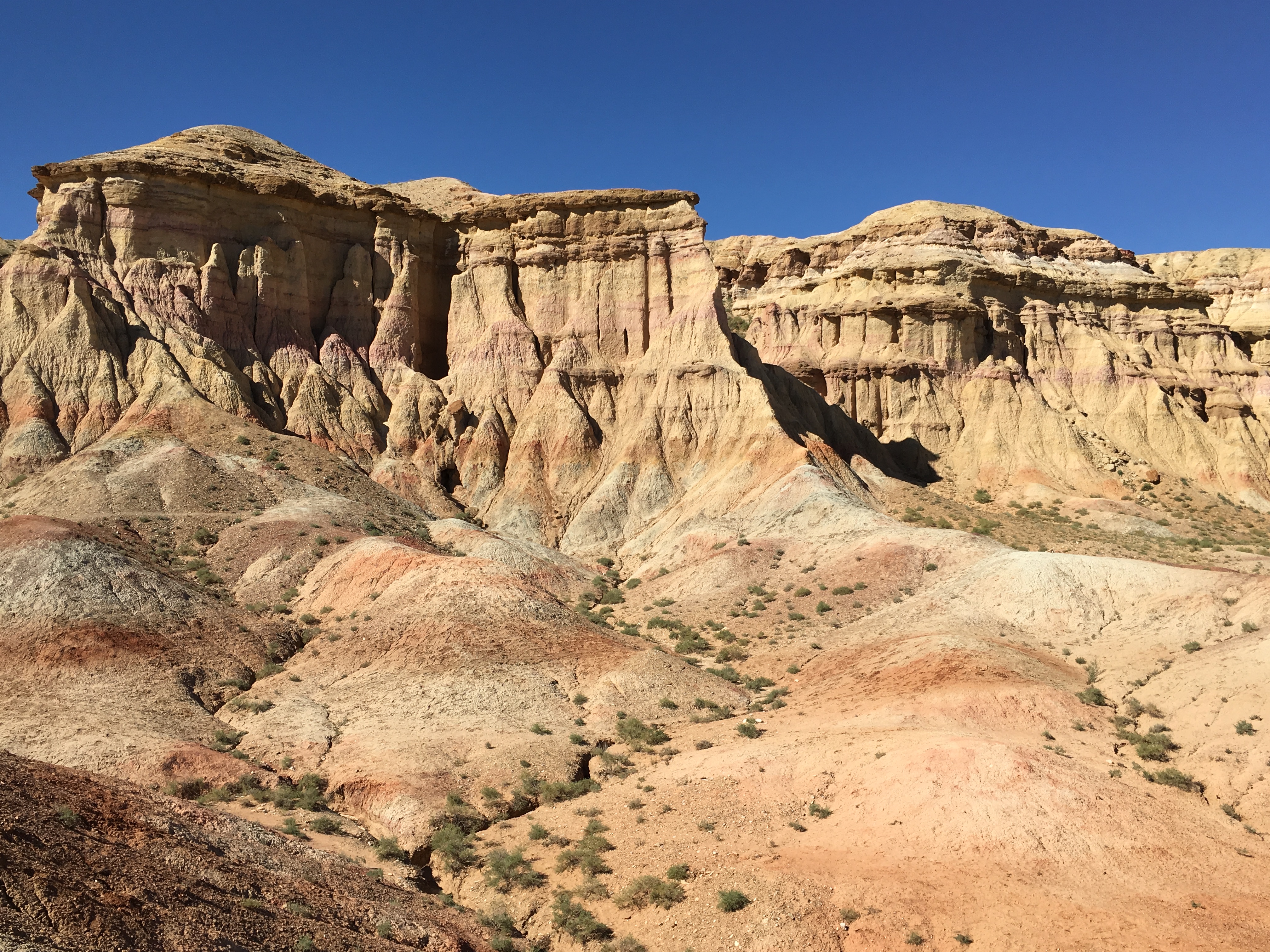 A month later, here’s the continuation of our Mongolian adventures (not getting lazy 😅… just hard here in China to find good internet that allows us to access all the blocked “western” websites, which includes all the Google products, Facebook, instagram… and we realised our blog uses plugins for all of these!).

So… Mongolia. We thought those green plains with horses were pretty cool, but then we were just stunned by the diversity of landscapes in the Gobi. Which is actually not a desert, but a large and diverse region covering the South of Mongolia and North of China, with dry plains where camels and goats roam eating the hard grass, a few sand dunes, but also rivers, mountains and crazy rock formations. Just have a look!

Lost in the desert grasslands

We arrived in the flat, dry grass plains of the Gobi, and after driving in the emptiness for a few hours, our guide decided it’s time to pitch our tent near a water source. A glorious camping spot, where we got awoken by a herd of goats that came to drink in the morning.

The following day, after several hours of driving on the rocky grassland in some direction, sometimes sinking in the crumbling soil (the 4×4 of the UAZ had to be turned on several times), the guide decided it’s lunchtime. While we ate, a pack of wild-looking horses came by to check us out… and left. Quite surreal.

These half-wildlings came to check us out at lunchtime

Then we discovered that we are on the lookout for a nomad family that should have been around there, but apparently moved to find more grass for their herds. Driving up a hill, the guide managed to get some mobile reception and contact the family. We imagine the conversation went something like this: “So drive for an hour towards the north-west, until you see rocky bits on your left, then it’s time to turn east, drive for 10 minutes and try to spot our yurts. Easy!” Ha ha. Given the heat, absence of any shade or road, the closest petrol station being several dozens of km away, and some hesitation from our guide and driver who kept discussing in mongolian… we were kind of wondering if it’s time to panic yet!

How to milk a goat

Turned out it was all under control (or lucky) as after a while we spotted the family. They had a huge herd of goats, cows and camels to take care of, and let us help in all this – although not sure it was for the help, probably more for the fun of seeing poor foreigners making fools of themselves 😛

So.. the goats. There are hundreds of them, and the whole family turns up to help milk them. First you run around screaming to get the goats into the enclosure, but only the female ones. It was a total mystery to us, but somehow they had a way of instantly recognising the males and shooing them away while shooing the females right into the enclosure… Probably takes growing up in the Gobi to develop this skill!

Then the milking starts, by several teams of two. First you need to spot a goat, firmly grab it by the horns and extract it out of the mass of goats. Obviously it doesn’t want to be dragged hell knows where, and tries to resist as much as it can. Then you proceed to holding it still, while someone pinches the teats to check if it was milked yet (another team may have milked it already). Then you pull the two teats skilfully to extract all the milk. Then you push and kick the goat to dispatch it outside of the milking zone. Wipe your sweat, and recommence 50 times. Phewww!

And after that, it’s time to catch those baby cows and camels to attach them safely for the night. And then it’s time to cuddle that baby goat born yesterday, with his friend the kitty. What a day…

Get them into that enclosure

Find those teats and pull!

The “real” desert with sand and all

Then we reached the sand dunes of Khongoryn Els, called the Singing Dunes (probably because of the strong winds?), which look like a “real” desert like we imagine it, but in reality are just 3% of the Gobi. They are incredibly high and look really surreal when they just start in the middle of the grasslands. We got to ride around them in camels and climb on top to see the sunset.

The dunes just start like that in the middle of nowhere

Camel ride in the dunes

He is so soft and beautiful!!

Climbing the dune, on all fours and in the wind.. the views had to be deserved!

Otherworldly views from the top

Several times, we were driving and out of nowhere, an incredible rock formation full of colours was there. The Falming Cliffs of Bayanzag is where hundreds of dinosaur remains were unearthed in the 1920s.

Tsagaan Suvarga – Another crazy place that looks like Mars

Close-up of the dust that causes the colour

Yoga on the rocks

We also hiked across some mountainous areas that didn’t look like the desert at all, maybe more like the Alps really. Camping there, we tested our skills at making fire without wood or matches, but with cow dung and flint that some friends thoughtfully gave us before we left .. it worked!

The canyon where the snow never (normally) melts

The winning team – our guides and adventure friends for 10 days

There we go… who still thinks the Gobi is a desert??