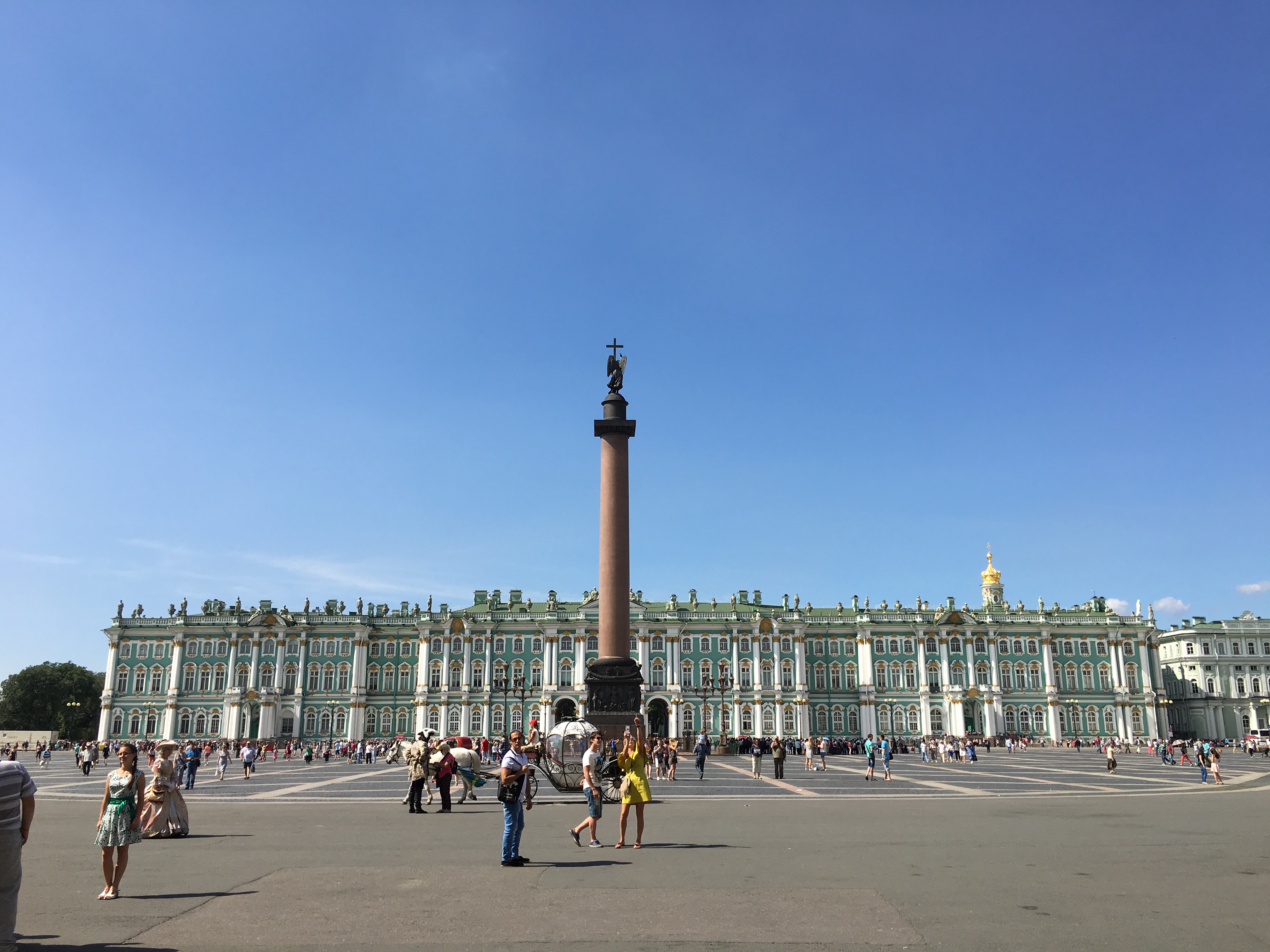 We had heard so much about Saint Petersburg… and we were not disappointed! This imperial city was built to impress, and we were duly impressed. We were lucky to visit during the white nights, the period when the sun never really sets. That is in itself quite impressive and unique.

The jewel of the city is the Church of the Saviour on Blood, built in the late 19th century as a memorial to an emperor assassinated there. It’s striking at all moments of day, and also very beautifully decorated inside, with mosaics rather than frescoes. We loved it even more because our fresh eyes and minds had not gotten church fatigue yet!

At 2h in the morning

Ceiling – one of the domes from the inside

The iconostasis hides the sanctuary

The whole city is full of grand and beautiful buildings, such as aristocrat houses, additional retreats of the emperors, public buildings and museums, all surrounded by rivers and canals. It’s simply hard to find a place that is not pretty.

City of canals and over 300

One of the numerous bridges

Church where the Romanov imperial dynasty is buried

The Flying Dutchman restaurant-hotel in a boat

Church where we attended a service

In summer months, the several bridges across the main river Neva lift during the night, so that large cargo boats can pass through the city. There is a precise schedule, and citizens need to plan their lives around it – from around 1:30 to 4:30 am, there is no way to go through between the North and South parts of the city. That is, until that big bridge is built (the one I mentioned here).

The bridge lifting is quite spectacular, and although it happens every day during 3 months, the locals love it as much as the tourists. We were surprised to see the huge crowds of families and friends who came to picnic, listen to street music, drink, hangout, enjoy the warm summer night outdoors, and of course to take selfies in front of the lifting bridge 🙂 Including on the water, where there was a traffic jam of tourist boats. Have a look at the video below as well (the full bridge lifting lasts about 3 minutes but we shortened it; at the end you can see the big boats passing).

The bridge is risen and the boats are gone

Big boats can now chug through…

We were lucky to get tickets to the Mariinsky theatre to watch the ballet Raymonda, which premiered there in 1898 – a real typical Russian ballet experience. Talking about dance, there was a forró festival in St Petersburg that weekend, so we danced to our hearts content until 5-6am. With the white nights and the sunrise at 3am, our bodies felt like it was never time to sleep! And one of the parties finished with many people jumping in the pool – Cesar was very scared that his friends would grab him and throw him in the water 😛

The dancers came to salute after each

Roda for the organisers

4am… not even tired!

And here’s a little video where we captured random things we saw in the city: