What does the yak say? 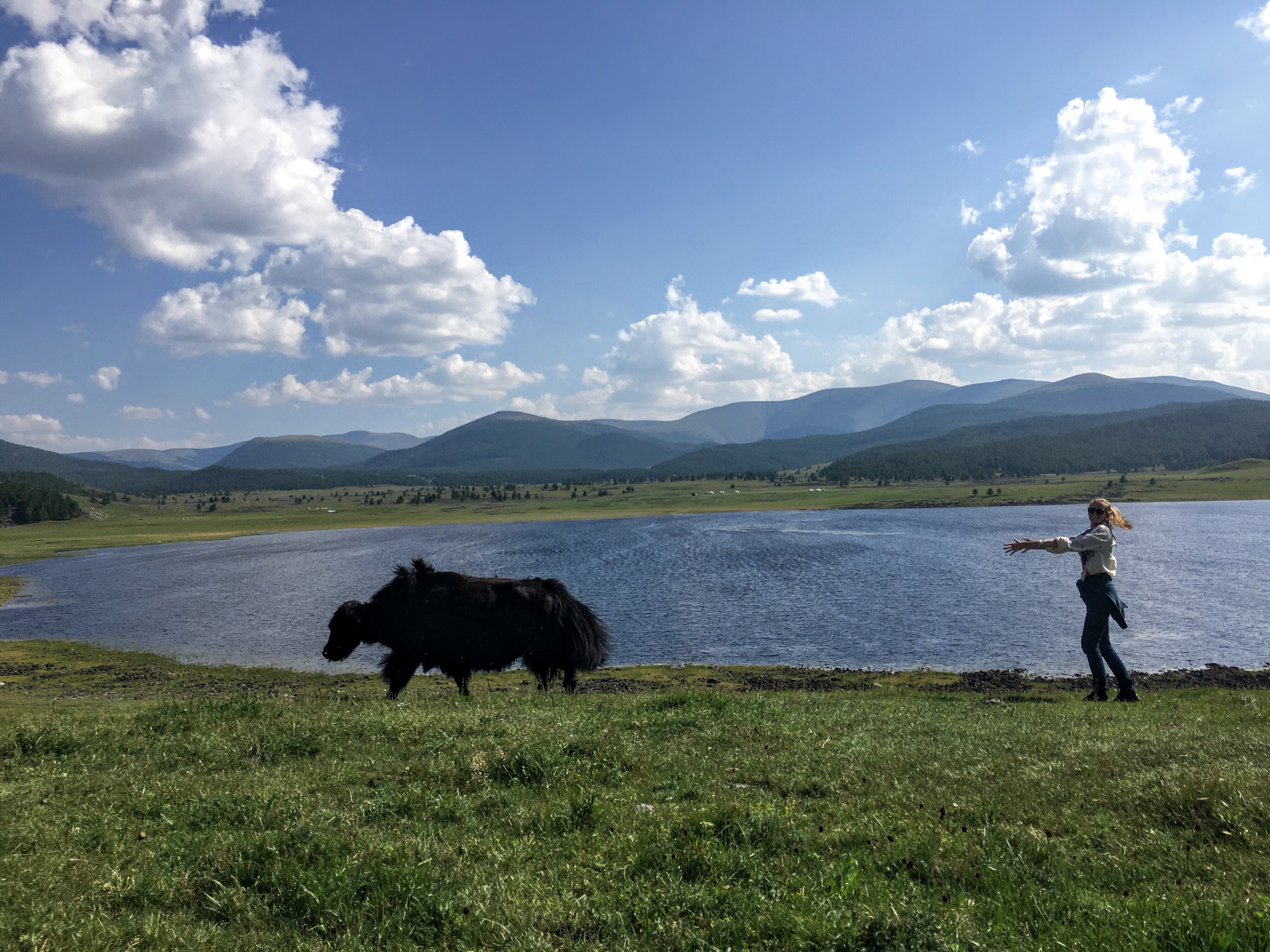 We spent about a week in the green Mongolian plains in the North-Central part of the country, before going down to the Gobi province. We did a 2-week tour with a small group of 4-5 people, plus the driver and the guide, driving (or rather bumping!) around in an old soviet 4×4 UAZ van, on dirt roads and sometimes just on the steppe, crossing rivers and steep mountain passes. We were sleeping in the gers (yurts) of local nomad families, and occasionally camping with tents when no family was nearby. No shower or bathroom, only rivers and woods… Real adventure time 😛

We stayed one night here with a family

Horses refreshing near a salt lake

Horses cooling down in the river

Come here yakky – can i milk you?

For 4 days we abandoned our transport and crossed the mountains (in the Naiman Nuur national park), by horse and foot only. Yes, the bum does hurt a bit after several hours on the horse, but to be honest be were expecting worse! The horses were very gentle and intelligent –  they knew the road and chose the best way to navigate the rocky and muddy mountain path. One spare horse was carrying the baggage and tents.

Yaks carrying the luggage (ours was actually on a spare horse)

Pause for yogurt vodka with the locals

Our camping spot, and Cesar unsuccessful in catching fish for dinner…

One of the 8 lakes of the national park

Cesar made friends with the local kids in each family, while ieva chose her friends based on hair colour (yes, apparently some rare mongolians can be blond!).

So… what does it look like in a ger (yurt)? It’s surprisingly similar from family to family: sides lined with seating/beds, oven in the middle (to cook and warm, mostly using dried cowdung), an orange chest of drawers with various buddhist symbols and family souvenirs/pictures, and a big pot of fermented mare’s filk in a corner. Visitors are welcomed with this drink, or yak/camel milk tea, as well as dried curd (a sort of very sour and hard cheese). To sleep, they just push everything aside and roll out little mattresses and covers.

And that’s how you sleep!

In a few of the villages that we drove by, they were celebrating the Nadaam festival, a party and competition in 3 traditional sports: horse racing, archery and wrestling. In the race, horses gallop for ~30km in the plains at full speed, and therefore the riders need to be as light as possible – usually boys of 6-11 years old! It was crazy to see a baby cross the finish line whipping the horse with his little arm :O Then everyone wants to get some sweat from the winning horse to get lucky (Cesar got very lucky with a handful of sweat!) and the family receives a big prize like a car. In archery, they use traditional bows from wood and leather, blunt arrows and ladies are also allowed to compete. As for wrestling, we heard they train by pushing logs up the rivers :O and there are no weight categories so the fat guy won…

Getting ready to party

And so what does the yak say?? Something similar to the pig actually 😀

Next article will include our adventures in the Gobi, there are just too many things to say!